Kamu workshop: Feedback on board games designed for immigrants 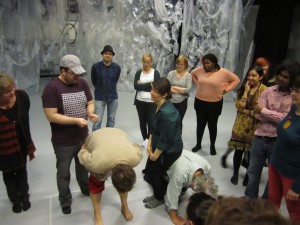 Approximately  40 students, teachers and other interested audiences were gathered at the Kamu workshop to test games that are designed to support the integration of immigrants. In these games, the following themes have, for example, been present: familiarizing the player with the Finnish concept of time, thinking up a new hobby and getting to know the city of Helsinki better. In the spring of 2013, the senior lecturers Marja Kannelsuo and Jouni Piekkari were instructing the developing of such games as a part ov Metropolia UAS’ innovation studies.

If an educational computer game has a green frog jumpling on the computer screen, is a student with, say,  ADHD  capable of using it or does the frog distract him or her and take their attention elsewhere? How can board games teach Finnish to a group of adult leaners in a way which is not childish and is able to take into consideration the different initial levels?

During one Saturday, the workshop participants familiarized themselves with operational board games and a city adventure game. They gave feedback and ideas on how these games would work as well as possible for different target audiences. One objective of the Kamu project is to develop games which are suitable to everybody  – also those with learning difficulties and different initial language skills.

“Students have had wonderful ideas for games. Some of them, the Like-o-meter for instance, are already suitable for productization”, says senior lecturer Jouni Piekkari, praising the students’ work. During the autumn of 2014, these games will be tested by the project’s peer learning pairs. After the testing phase, detailed descriptions will be provided for on the Kamu website.